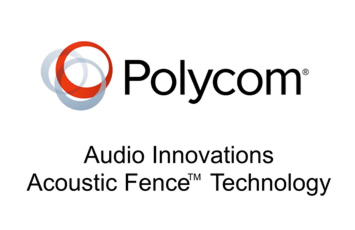 Polycom NoiseBlock has been specifically developed for the RealPresence Group Series and RealPresence Collaboration Server. The underlying algorithm is capable of differentiating between human and non-human sounds, and automatically blocks unwanted background noise such as paper rustling or keyboard rattle – whereas human voices are recognized and led through.

The Acoustic Bubble technology has been designed for users of the RealPresence Video Collaboration Desktop Software with a headset in noisy environments: it eliminates unwanted background noise – such as peripheral conversations or printer rattle – by matching the sound level between notebook or desktop microphone on the one hand, and the headset microphone on the other. Only sounds within the "bubble" around the headset micro are transmitted - everything else disappears. This ensures that video conversations are not superimposed by the surrounding noise of an open-plan office, but remain clear and understandable. Thus, the Acoustic Bubble not only suits any type of open office environments, but, in particular, also the mobile use in public places  etc.

Similarly, Polycom also offers an Acoustic Fence for the RealPresence Group Series. It basically works on the same principle as the above-mentioned, but extends the "bubble" to all connected microphones: a microphone "fence" is built around the user(s), effectively blocking any peripheral noise.

Interested in the new Polycom acoustic software enhancements? Please contact us - we look forward to meeting you!