Over 6000 people ran 5 km downtown Kiev to support children with heart deseases. DEKOM established a streaming from the event. 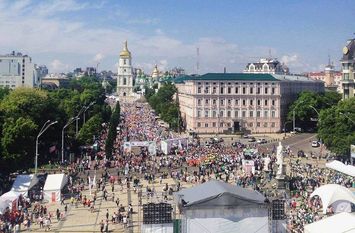 «The chestnut run» is one of the large-scale charitable sport events in Ukraine. DEKOM established a live streaming of the event for Amway, the official sponsor of the run.

More than 6000 caring participants ran 5 km downtown Kiev. All these people gathered to do sports, check their shape, and support children suffering from heart diseases. Amway announced its general sponsorship for «The chestnut run 2016» and invited DEKOM to set up a live streaming of the event for those who wanted to join, but for some reasons were unable to come.

The DEKOM UKRAINE team was streaming the event for more than 3 hours, while cameramen and editors were being engaged directly on the streets.

«The chestnut run» has been held since 1993, annually gathering donations to support children suffering congenital heart diseases. Collected funds are used to buy necessary medical equipment for the Scientific and Practical Center for Pediatric Cardiology and Cardiac Surgery in Kiev.