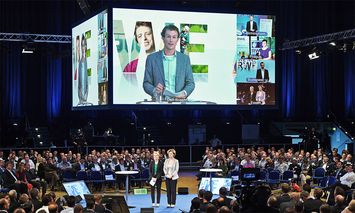 RWE is one of the five leading electricity and gas providers in Europe. In order to survive in this environment and to contribute to the further development of the European energy system despite difficult conditions, the company has launched a comprehensive program of measures.

From September 30 to October 01, 2014, numerous RWE managers came together for a two-day event - the technical implementation of which was entrusted to DEKOM AG.

At the instigation of the chairman of the board of directors of RWE, Peter Terium, several international locations had to be networked: While the majority of the approximately 2,000 participating executives would gather directly at the Essen Grugahalle - at the location of the group headquarters - other parts of the event in Birmingham, Budapest, Den Bosch and Prague.

The various plenary sessions, workshops and presentations should not only be synchronized and transmitted in real time, but also be recorded, prepared and documented in parallel. In addition, there should be the possibility of bidirectional live communication between the sites at any time.