Only one year after the release of Microsoft teams, this tool will be central to Microsoft's communication solutions. 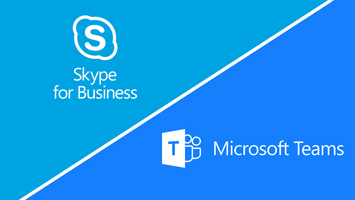 The rumors from the last months have now been confirmed. It is official, Microsoft Teams should replace "over time" its predecessor Skype for Business. This was announced by Microsoft at the Ignite 2017 conference.

The reason for this is that most features of Skype for Business have already been integrated into Microsoft Teams. Office 365 users are now ready to upgrade to the new tool. Microsoft is planning to release a roadmap for companies to assess when Microsoft Teams would be a useful addition to their company.

Microsoft Teams should be the reflection of intelligent communication and therefore contain all that is necessary to simplify collaboration. The chat-based work environment, single as well as group chat has been the focus, but in the future also those call and video functions should be taken over. This includes calls to and from landline numbers, holding a call, transferring calls, and implementing a voicemail. In addition, you should be able to record / transcribe conversations and get full access to all Office 365 tools. The Audio Conferencing Feauture is already supported, but is still in the preview phase.