This word premiere was special. At the same time, selected wines should be tested at 14 locations and their transmission should be displayed on a screen. 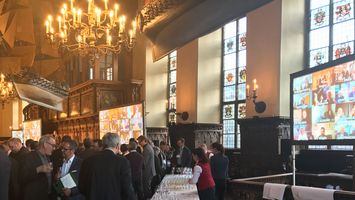 Bremen is a town with ancient traditions, a worldwide linked up harbour- and logistics- location, town of the astronautics and specialist for digital technology. The latter was given especially originally on the 25th of April 2017, on the occasion of a senate receipt in the city hall of Bremen for the participants of the two day professional congress of the IT Planning Council – in form of the first digital wine test worldwide: 300 guests on site as well as 14 subjects on six continents were invited to taste a selection of exquisite, also wine from Bremen, at the same time – linked by video conference, synchronically in picture and tone, realised by DEKOM.

„The whole word tries together with you!“ the presenter welcomed the audience in the upper city hall – and really, the wine test took place all around the globe: 14 subjects from Sao Paolo, Paris, Helsinki, Barcelona, Vienna, Moscow, Johannesburg, Namushasha, San Francisco, Washington, Bolzano, Leeuwarden, Melbourne and Awipev, Ny-Alesund were interconnected live by video conference. In the run-up to the worldwide scattered participants have received in each case precisely the three wines together with glasses, which were tasted in Bremen.

To carry out this unique to date action successfully, the whole event technology, i.a. very modern laser projectors, LTE-Router and more – as well as the audio engineering was put, installed und served by DEKOM. Already within a 2-month pre-planning all international counterparts were equipped with software clients, processes were conceived, wine tester from all over the world were instruced; connections established and tested in advance. On the event day itself the DEKOM-technicans were responsible for, hosting all connections worldwide by the in-house infrastructure of the DEKOM AG, supervising redundancy during the transference, controlling the layout by hand in permanent vote with the moderation, and more.

„The challenge by the planning consisted i.a. in bringing logistics and technology together.“ Arwed Plate, VP Sales, DEKOM AG

Thanks to the absolutely frictionless technical completion the event was a full success – and this not only for DEKOM: „We wanted that our guests keep the state of Bremen and his strenghts in good recollection“ commented financial city council Henning Lühr his idea for this special kind of world premiere. In view of the numerous positive comments on the edge of the receipt this calculation went on.